It's not always easy to be an Arizona Cardinals fan.  Winning seasons have been few and far between until recently.  It's even harder to be a Cards fan in Alabama.  There just aren't many sympathizers or co-conspirators. Opportunities to see the games are few and far between most years.  Tonight seemed like it was going to be another disappointment but then he happened: 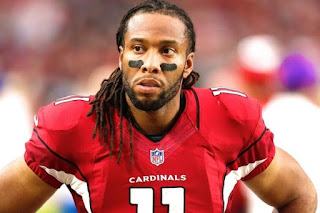 Like a fine wine that gets better with time-FITZGERALD
I know it's a hard one to swallow for Packers fans and you have my sports condolences this evening.
However, as a Cardinal fan it's a night for hope and anticipation!  Could this be the year?  I've told friends, that know me as the lonely Cardinals fan in Alabama, that I just want to see a Super Bowl win in my lifetime.  I thought it was going to happen once before and then Big Ben to Santonio happened. Maybe this is year instead of the normal maybe next year!
Posted by Wes Moore the former JBF at 1:00 AM