Received a mailbox package from my good buddy key2win as part of the CCW Team Swap.  Some really nice MAVS I did not have!  I am very appreciative buddy and hope you enjoyed and needed some of those Lakers! Posted by Wes Moore the former JBF at 10:42 PM No comments:

Someone asked me to write a post about my Pay it Forward Card Project and what is all about.  Its really not a new idea, I know traders that have done the same thing for years.  Its simply just a way for me to give back to fellow collectors and make the hobby fun for them and me too.  I keep lists for all three sports of traders that I know collect certain teams and in some cases players.  As I spend some time each week sorting cards by sport and team, I set aside the teams that I know can be used by someone else.  As time and finances allow I ship these out to my friends and a lot of times to traders I have never even traded with before.  I know it's fun to receive cards and even more enjoyable when you weren't expecting them.  24 surprise packages sent out so far this calendar year.  That includes 9 that were sent out today.  Where are they going?  Who's going to receive them?  I'm not saying but then again that's part of the fun!

Wes
Posted by Wes Moore the former JBF at 5:59 PM No comments:

Howdy, Howdy.  I was in the process two days ago of trading off the cards that I didn't plan on having shipped from the Topps Million Card Giveaway.  I came across a trader on the facebook page that offered me some in hand vintage for some of the cards I was offloading on the sight.  Here are the beauties I received today.  Thank you Murray from Facebook! Don't forget to follow or comment on my blog to be registered to win in my first contest.  There can be 8 winners and as of now only 4 people I believe have qualified so get in on the action. Until next time, Have a great night!  Wes 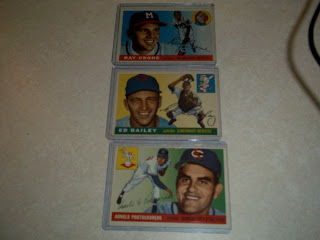 Posted by Wes Moore the former JBF at 5:54 PM No comments:

Greetings to you all on this Tuesday afternoon.  Many thanks going out to my new trading buddy San Jose Fuji.  He made an appearance in my mailbox today with an awesome package of Brock Huard, Braves, Mavericks, and Cardinals.  Thank you very much! 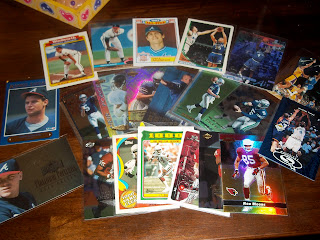 I shall pop up in your mailbox soon.  Only one complaint though my friend! How could you send me the coolest card in the package without autographing it for me!  I will send it back and I will be looking for an autograph! Just kidding.  Many thanks to you for everything.  Giving makes the hobby fun, doesn't it? 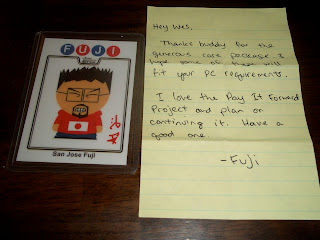 Until next time-Love life!
Posted by Wes Moore the former JBF at 8:03 PM No comments:

Good evening. Going to share a break with my readers.  Busted 3 rack packs in 3 different sports.  Nothing spectacular.  All that don't have NFT listed can be had for Arizona Cardinals or Alabama Crimson Tide Players.  Would also like to trade for Topps Diamond Giveaway Codes or Gridiron Giveaway Codes.
Away we go: 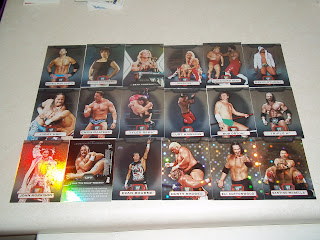 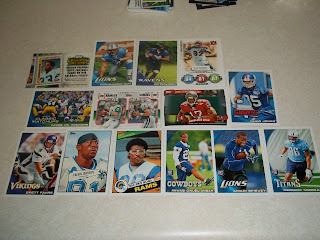 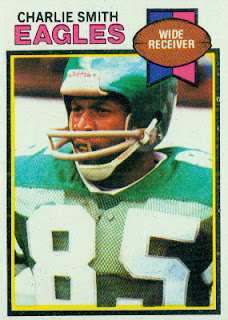 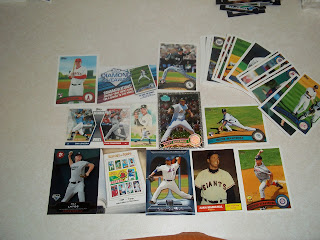 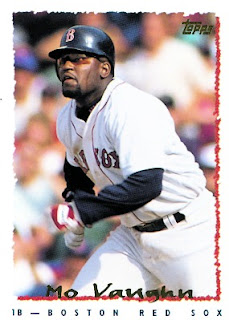 DON'T FORGET TO CHECK OUT MY CURRENT CONTEST-ONLY TWO ENTRANTS SO FAR!!
Posted by Wes Moore the former JBF at 8:21 PM No comments:

Good Saturday afternoon!  Opened my box today to find a fat envelope courtesy of Fuser from CCW.  It was stuffed with my team-the Arizona Cardinals!  Tim always sends great stuff!  Many great PC items were there including a couple of Fitzgeralds I needed, some cool autos, and a jersey card.  This is one of many reasons that I frequent  Cardcollectorsworld.com - so many great people and friends there!  Thanks again Tim! 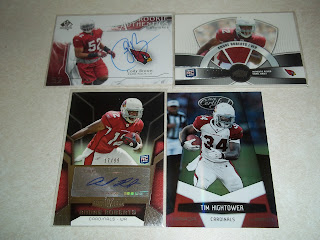 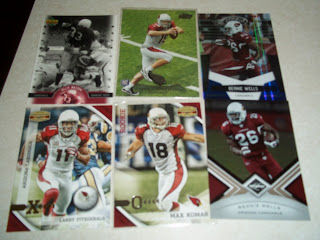 Until next time, love life and don't waste a minute!
Posted by Wes Moore the former JBF at 2:42 PM No comments:

I'm told that lots of blog owners give away prizes.  Right up my alley, I love giving away stuff. So here is Contest 1 from the blog of Jaybarkerfan's Junk:

Post a comment on one of my blogs OR become a follower between 2/17/11 and 3/1/11 and you will be entered to win one of the following prizes.  If I have as many entries as prizes, I will give them away draft style via random drawing. So get to commenting and following today! Love life~Wes
Prize 1-1990 Troy Aikman Topps Super Rookie #482
Prize 2-2005 Tom Brady Topps New Age Performers Insert NAP9
Prize 3-1995 Nolan Ryan Classic Embossed Metallic Impressions Card 3 Astros
Prize 4-1987 Topps Roger Clemens 340
Prize 5-2010 Hot Wheels Shelby Cobra "Daytona" Coupe Treasure Hunt 05/12
Prize 6-2011 Hot Wheels Studebaker Avanti Treasure Hunt 5/15
Prize 7-2005 GI Joe Snow Serpent 3 3/4 Action Figure
Prize 8-1985 Rowdy Roddy Piper Game Card from the WWF Board Game 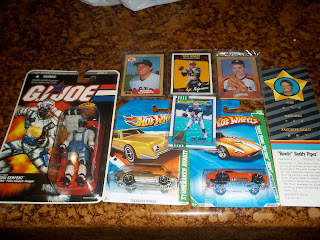 Posted by Wes Moore the former JBF at 2:27 PM No comments:

After recently busting a few rack packs of 2010 WWE Topps Platinum, I started taking a little walk down memory lane.  When I bought the two packs at a local Wal Mart I was quizzed by the checkout clerk.  She wanted to know if I was aware that wrestling was indeed fake.  I told her that I actually learned that years ago but it was still a part of my youth and a source of happy memories.

The memory of traveling to nearby Huntsville, AL to see Hulk Hogan at a house show.  My dad lifted me up on his shoulders as I was clutching my Hulk Hogan LJN figure, I still swear that Hulk was pointing at me when he posed after his win.  Years went by.  I went to many shows, watched everything remotely associated with wrestling, I played with the figures-for hours.  I had my own champions, I developed my own storylines.  As a kid, I think these hours spent weren't a waste but instead helped to foster my creativity.

I met many of the wrestlers in years to come.  I even did some business online with a couple of them.  Here are a couple of the memories and interactions that still make me happy.

Jake "The Snake" Roberts
The Snake had always been my favorite growing up.  He didn't need any allies except another snake.  He just captured my imagination.  After his first WWE run and WCW run, he was going through a personal renaissance.  He had been through a drug rehab and discovered his faith.  My mom found out that he was actually going to be speaking at a small rec center not very far from our home.  It was a no brainer for me, we had to go.  So we went and listened to Jake give a talk on all the tribulations and mistakes that he had encountered in life.  After the presentation, Jake invited anyone down that wanted to meet him or get an autograph. He spent several minutes with me.  He was very articulate and polite to me.  Signed an 8x10 for me and inscribed it: Wesley-Praise God.  Hate to hear over the years that Jake has continued to have problems but I still appreciate his talent in the ring and the chance that I had to meet him all those years ago. 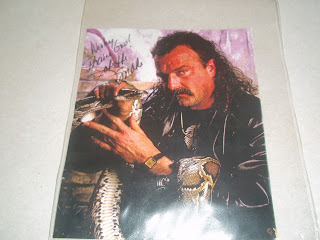 JYD
Another childhood favorite was the JUNKYARD DOG.  He was no technician in the ring but the kids(including me) loved him.  I met him not long after his WCW run when he appeared at indy show in Cullman, AL.  There weren't many people at that show but everyone that came to his table got to experience one of the kindest, nicest wrestlers I've ever met.  He was so nice.  He signed an 8x10 for me as well.  Not long after that JYD passed away in a car accident.  I was glad I had the chance to meet him before he left us. 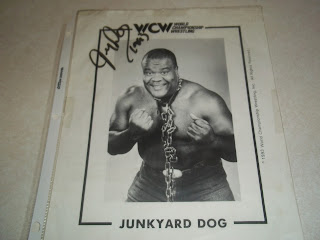 These are just a few of the "legends" that still remind me of my youth.  Another day I will share more stories.  Have a great day and love life~Wes
Posted by Wes Moore the former JBF at 12:39 PM 1 comment:

Greetings to everyone!  My name is Wes Moore.  I am a collector. I am a fan.  After following several blogs for awhile, I decided I would give blogging a try.  My usual haunt is CCW-www.cardcollectorsworld.com but I have traded my cardboard and plastic on other webforums throughout the years.  The hobby which used to be a big financial hindrance for me has settled into an occasional hobby that still brings me a lot of joy and relaxation.  In this blog I will share my thoughts, stories, and a glimpse into my collection.  Hope that many of my online friends will join me in this voyage.  -See you on the blog!