The value of LISTIA

Listia is sometimes a very neat little resource to unload and pick up cards. Last year I tinkered around with the site for a while but became bored with it.  I recently saw some fellow bloggers were dipping the foot in the pool so I decided to give it a try again.  I have unloaded some stuff on there and accumulated some credits which I am now starting to spend.  Even though no money is involved, I still try to break it down monetarily when bidding. Credits when won by posting an auction don't necessarily always go as high in bid as you might think.  Some auctions just don't get looked at and some get drove up with bidding wars.  I try to think about the credits as dollars. If you buy credits from Listia, you basically pay a $1 for every 3 or 4 hundred credits depending on how many you buy.  I like to think 400 credits roughly equal a dollar.  I think of this when I am bidding on auctions.  So I am going to begin sharing my wins and grading how I think I did. Should be fun!!

Auction Win=1 Pack of 1995 Pinnacle UC3 Baseball
Cost=500 Credits
At roughly 1.25 I decided to try and win a pack of these. They remind me of Sportsflix.  They had a few inserts to try for but of course I didn't score any!  I was just in this one for the fun of opening a pack of something that I didn't back in the day. 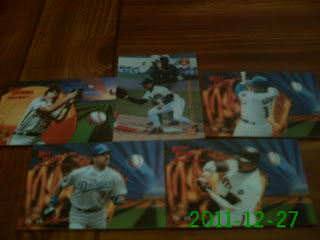 I ended up getting base of Barry Bonds, Mike Piazza, Mark Grace, and Alan Trammell.  I also got an "In depth" subset card of Rafael Palmeiro.  Nothing really in there for me but I will grade this auction win at a B-.

How do you grade it?  What do think of Listia? Have you ever tried it?
Posted by Wes Moore the former JBF at 1:38 PM